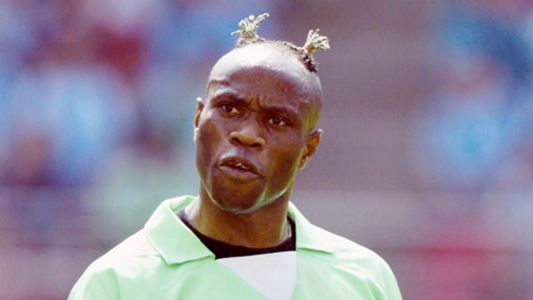 Inter Milan and the Confederation of African Football (Caf) have sent heartfelt messages to Taribo West on his 46th birthday.

The former Nigeria international is famous for his solid defensive performances and colourful hairstyles during his playing years.

The centre-back spent four years with Auxerre, where he won the French championship and Cup titles before leaving for Italy to team up with Inter Milan and featured in 44 league games during his two-year stay with the Black and Blues.

In 2000, West joined rivals AC Milan and spend one season with the side, including a loan spell in England with Derby County.

The Super Eagles legend also featured for FC Kaiserslautern in Germany, Partizan, Al-Arabi, Plymouth Argyle and Paykan before his retirement.

On the international scene, West had 42 caps for Nigeria national team after making his debut against Sweden in May 1994.

He was also part of the team that won the 1996 Olympic gold medal and played a key role as the Super Eagles finished as runners-up and third at the 2000 and 2002 Africa Cup of Nations respectively.

He featured in two World Cup tournaments and played his final game for the Super Eagles in a friendly against Libya in August 2005.

The football governing body and his former club have sent birthday messages to him as he reaches a new age.